Compliment is an immersive experience of street harassment I designed and created for the Oculus Rift. It demonstrates the atmosphere of intimidation and tension caused by street harassment on a daily basis and conveys the forceful intrusion and violation of space and attention that makes a woman feel vulnerable, angry, and silenced.

Compliment was featured at NYC Media Lab, Parsons Playtech, and SXSW, and written about for Motherboard, Geek Feminism, and Mic.

I was featured for Compliment and other work in Adobe's Project 1324 #CreativeImpact series.

When I moved to New York, I was suddenly confronted by the overwhelming amount of street harassment and its ensuing emotional effect. While in Houston I was sheltered from it for the most part – I have a theory about the protective bubble of cars – but on Broadway, in my Bushwick neighborhood, I was hit full-force on a daily basis. When attempting to explain why the harassment upset me to those who had not experienced it for themselves, I gathered that some people simply had no idea what it was like and were unwilling to give it much credence. Men were surprised by the regularity, pervasiveness, and severity of my experiences with street harassment, but did not really understand the repercussions of it or how street harassment supports, and is a symptom of, the dominant patriarchal system in which we live. As frustrating as it is for women's experiences and voices to be dismissed so easily, and so frequently, I realized that I could use my daily experience and my anger at continued disbelief to craft a project exemplifying the "compliment" of street harassment.

As a woman, multiple times a day I endure comments about my appearance, what men would do to me, how I should act, how I should properly respond, how I could please the men around me. Not to mention those who simply touch, bark, whistle, making smacking sounds, invade my space, or simply leer at my body as if the only thing keeping them from helping themselves is the fact that they have somewhere else to be. Women's bodies are routinely perceived as objects – objects whose sole purpose is for the gratification of the men around them. The entitlement is overwhelming.

This project is an exploration and manifestation of the harassment I have received, and an attempt to convey the feelings of vulnerability and frustration it creates and the "compliments" I receive daily. Through the Oculus Rift, participants are immersed in an ordinary day, in which a walk to the subway is fraught with unwanted attention and tension. From where will my train of thought be shattered next? Will I be able to pass by that group without feeling objectified and vulnerable? Will I take a longer route to avoid the construction site up ahead? Participants are unable to respond, as in the real world's concern for safety, and are forced to constantly hear and navigate unwanted attention.

Compliment explores street harassment and conveys the forceful intrusion and violation of space and attention that makes a woman feel vulnerable, angry, and silenced. 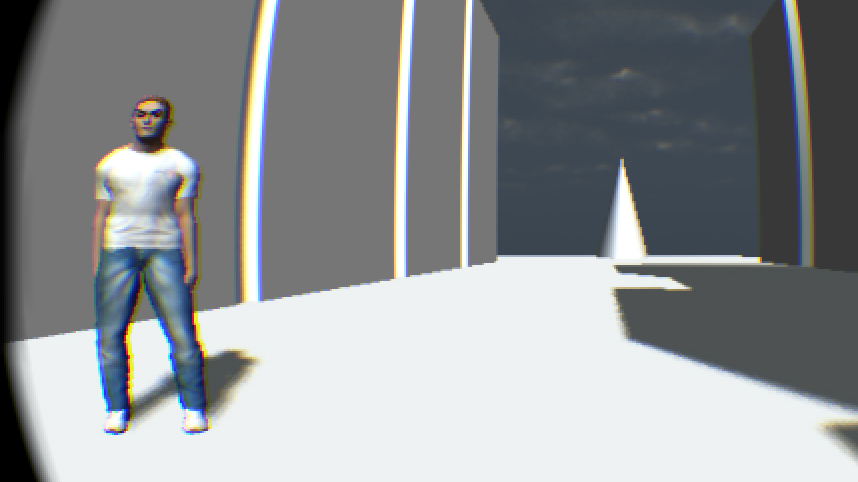 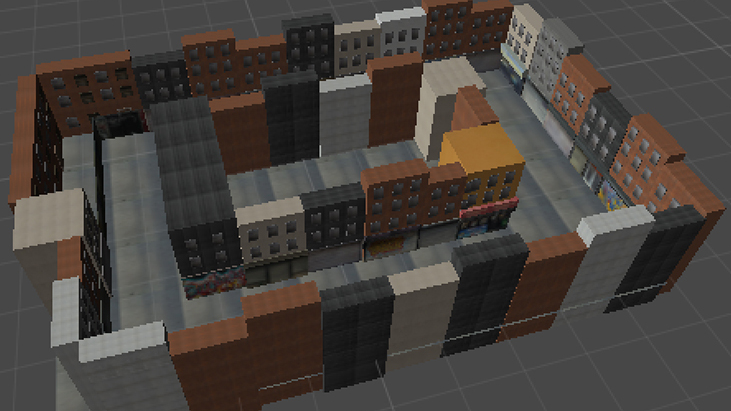 After experimenting with physical interactive media installations, I decided that virtual reality could offer an immersive experience to a wider audience and give users a more maleable sense of themselves than any physical installation could. For instance, Compliment's protagonist is small, lending a sense of physical vulnerability and size discrepency difficult to engender to users of larger natural stature. 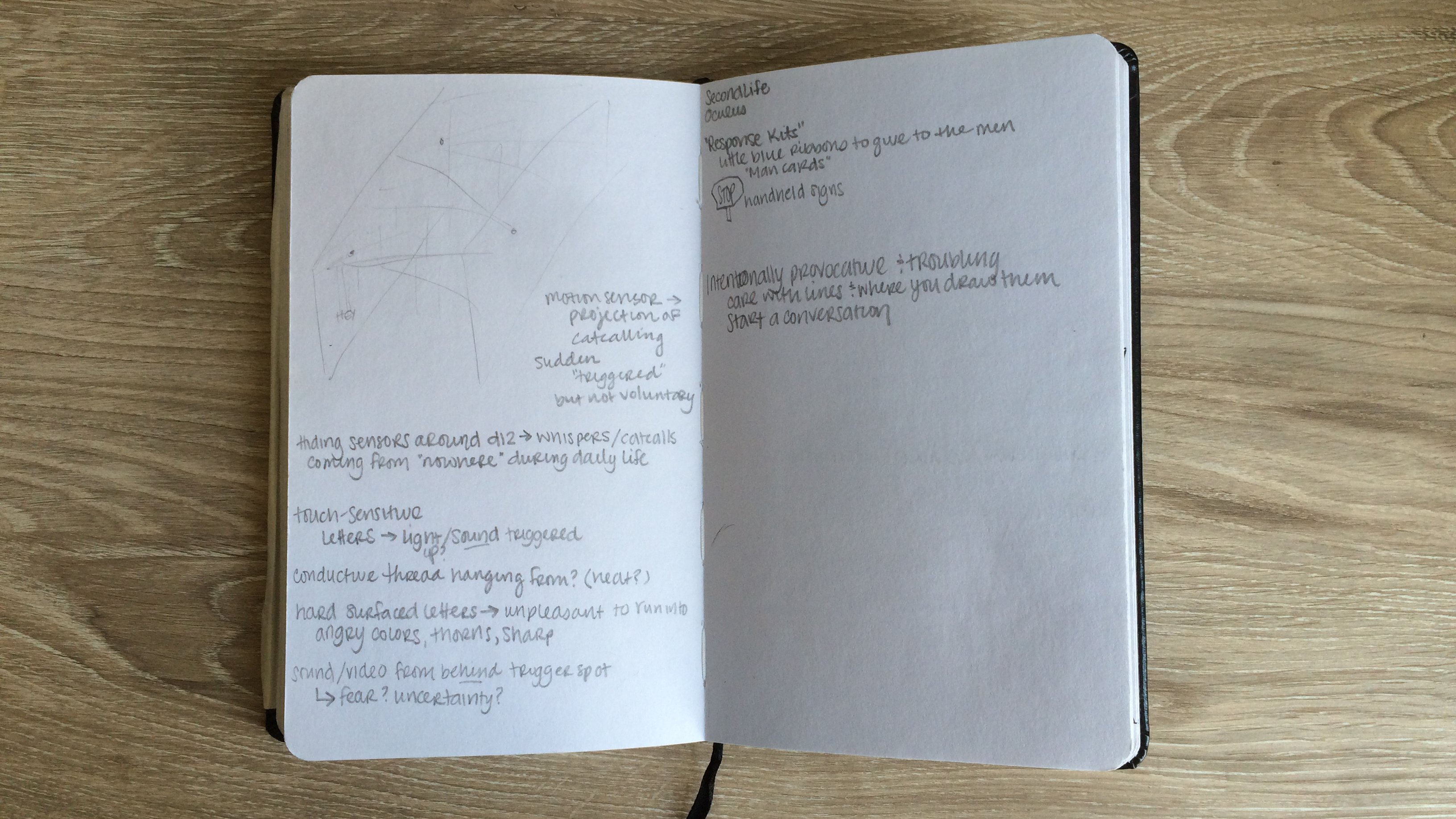 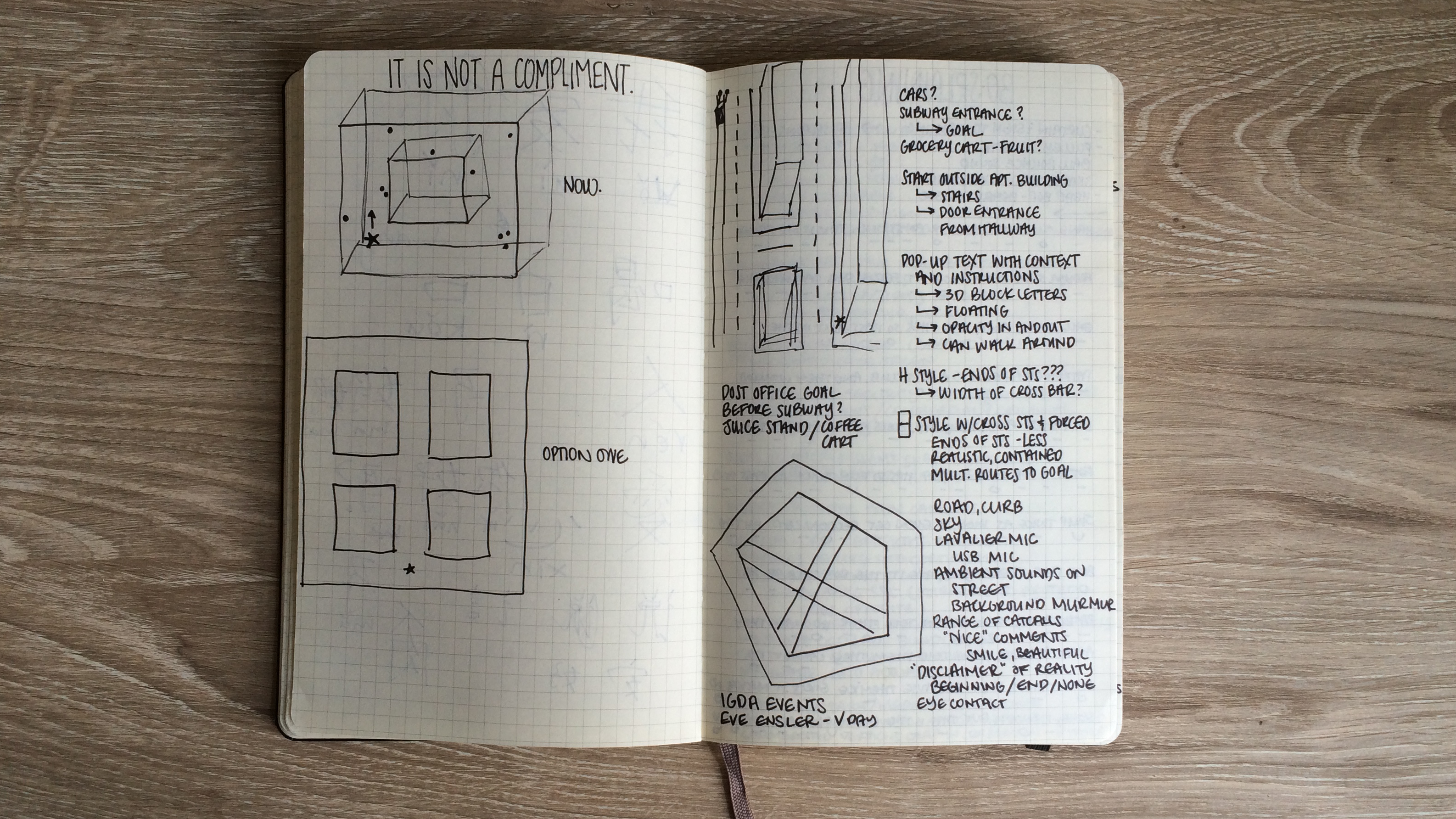 The first prototype of the project consisted of a blank environment with a few models of men to get the Rift up and running and the mechanics of the men's reaction to the player. I then textured out the block – inspired by Broadway in Brooklyn – to form a stylized version of a city block in which the player would be stared at and harassed by the men on the street. After playtesting, I tweaked the player/harasser interactions and radically altered the environment. I was inspired by some of the thoughtful and genuine responses I received at PlayTech by young people and adults alike. They really took the project to heart, which was my intent and makes me feel like I have already made an impact.

I expanded the area into a square, so that the player would not be trapped at the end, surrounded by harassers (two of the men will follow you down the street), and to give a bit more room and lengthen the experience. 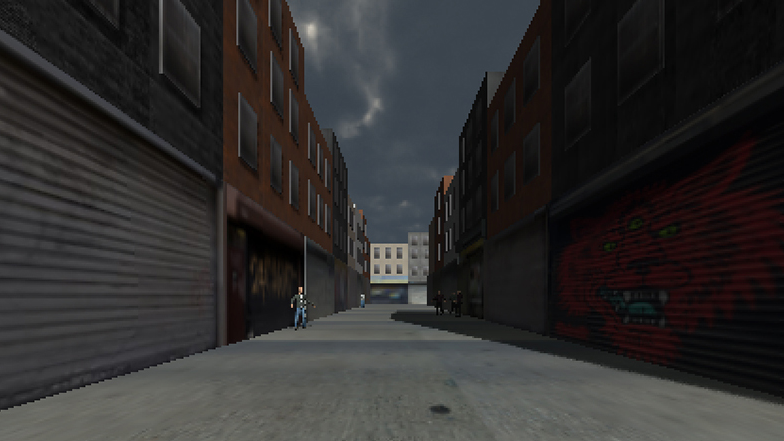 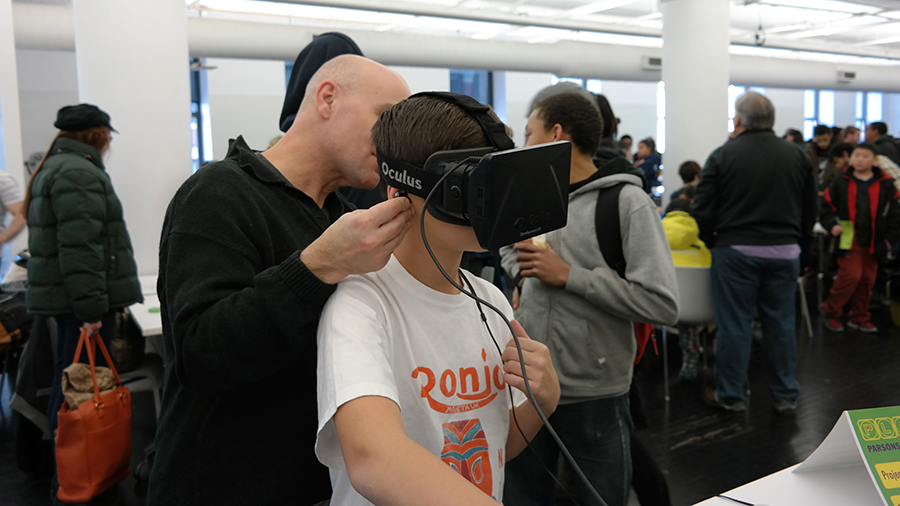 I created many more characters to fill the space, and after playtesting with this second iteration, added several people into the experience that merely go about their own business. This created a greater sense of rising tension as you navigate the space – the participant does not know from whom they will be harassed next so is constantly on edge, much as in life.

One of the strongest features throughout these first few prototypes is the designed height of the protagonist. The view from the rift is deliberately at a low level, about that of a small woman, in order to heighten the sense of vulnerability. Many of the harassers in the experience are much larger than the participant, which enhances the sense of danger and intrusion in confrontations. 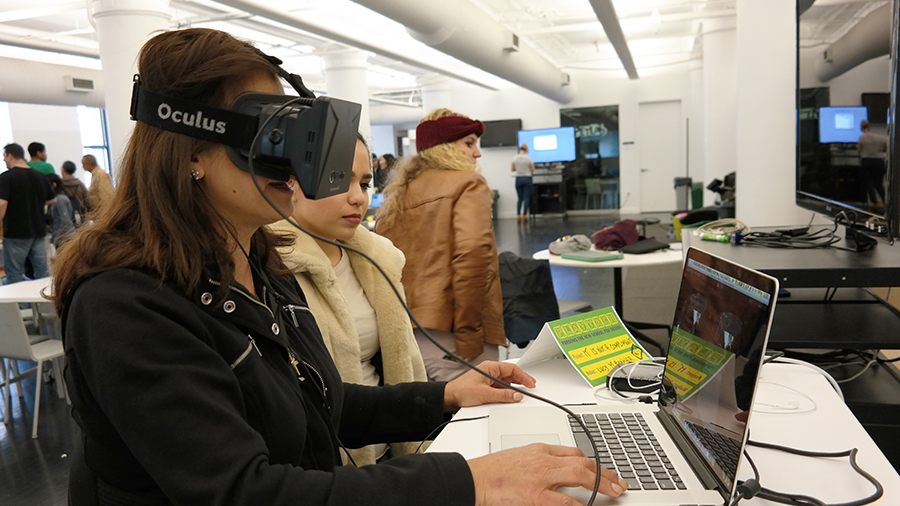 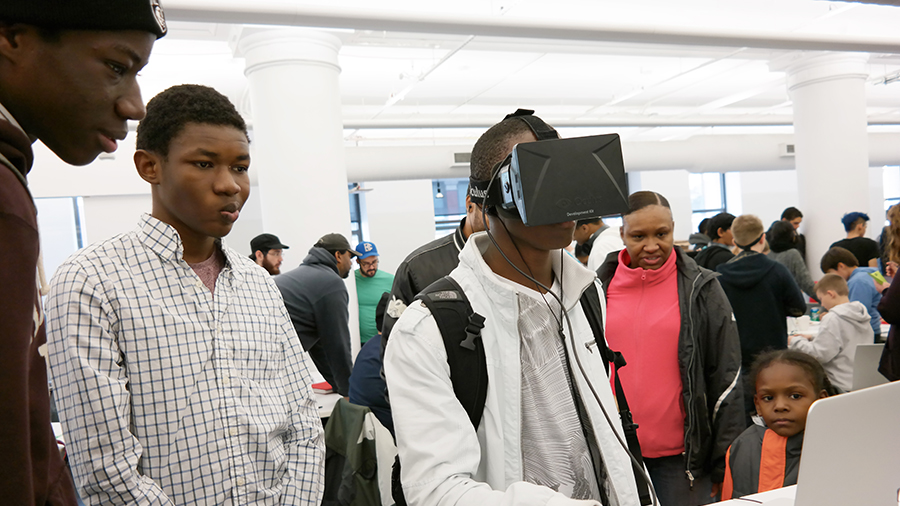 However, the square of blocks led to its own troubles, as right angles are quite difficult to navigate in the Rift DK1 – the head tracking does not follow exactly and players ended up craning their bodies to fully turn the protagonist. Participants also commented on the unreality of blocks connecting in that way, though noted the further feeling of futility and inescapability the square lended. 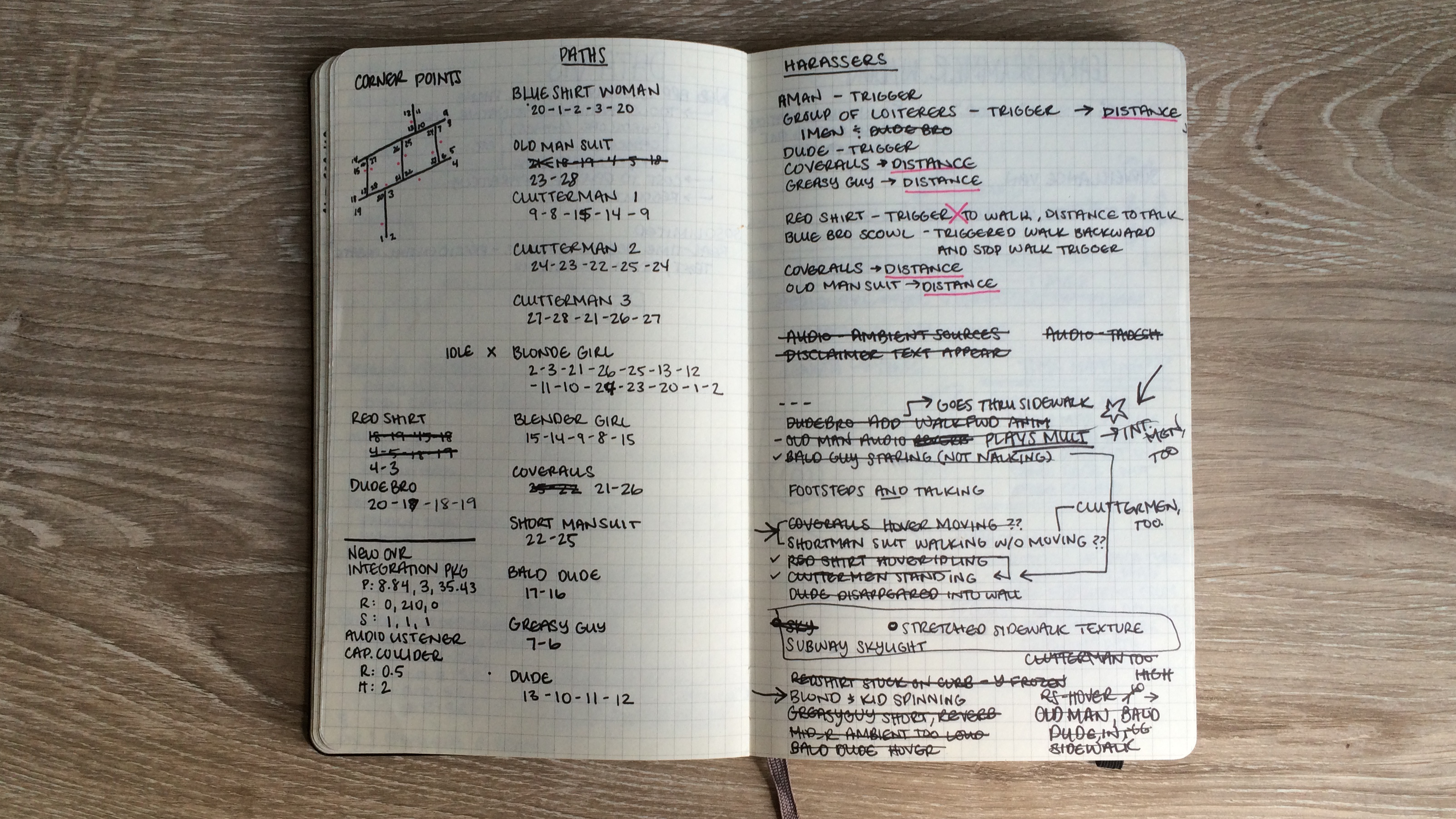 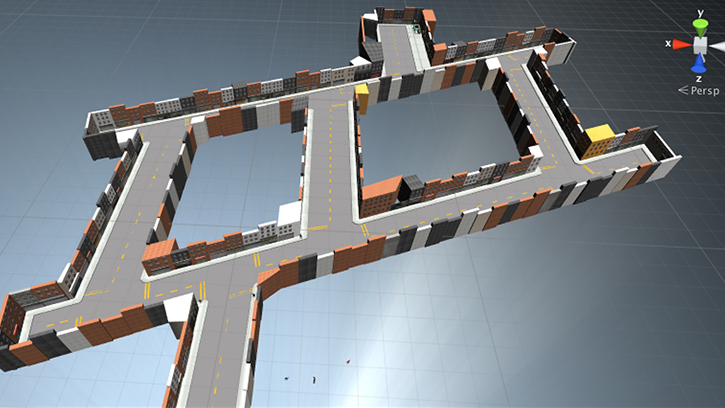 In the next iteration of Compliment, I worked with the turning capabilities of the DK1 to create a broader environment that participants can explore. The dominant path uses easier, larger than 90 degree turns, but has other streets as optional routes and is constructed more like an actual neighborhood. There are sidewalks and painted lines in the street, cars and trucks parked to the sides.

However, some players have noted a chill, empty feeling from the larger environment and a less dense dispursement of people. So, though perhaps more "life-like," the distance between other characters that the protagonist travels ended up diluting the effects of the experience. 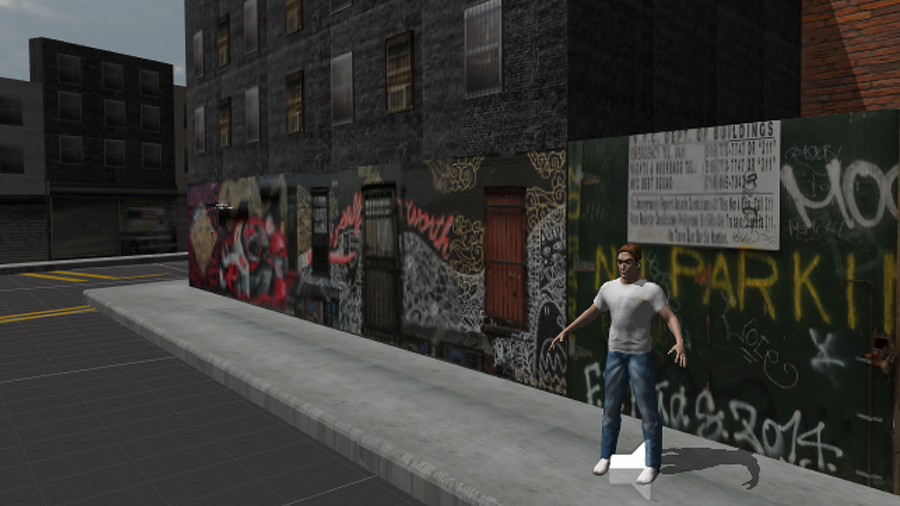 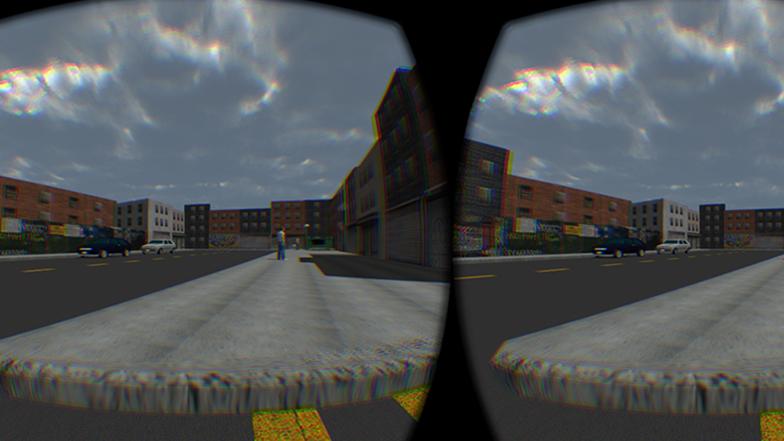 Several issues have emerged throughout the creation and iterations of Compliment. I struggled with lighting the scene throughout the first two prototypes, and while attempting a dark, moody environment, ended up with a scene so dark all the characters – harassers and bystanders alike – look the same: shadowed and looming. While looming is sometimes what I want, I do want to show the individuality and diversity of the characters – all types of humans make the decision to intrude on other humans' space and attention and fail to respect the fellow autonomy and humanity of women (and men!) of all types and appearances. Whether a woman is on Wall Street, 5th, Broadway or Atlantic Avenue, in a mini-skirt or bundled up for a snowstorm, harassment finds her. 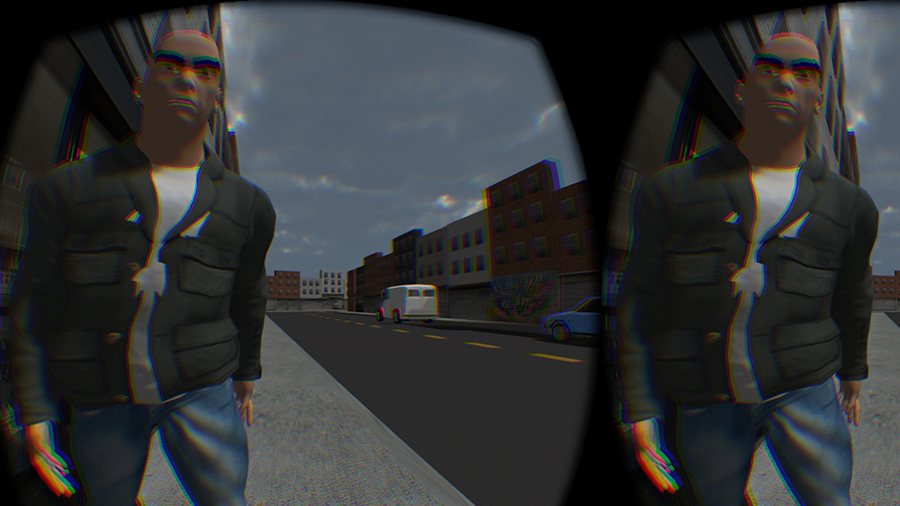 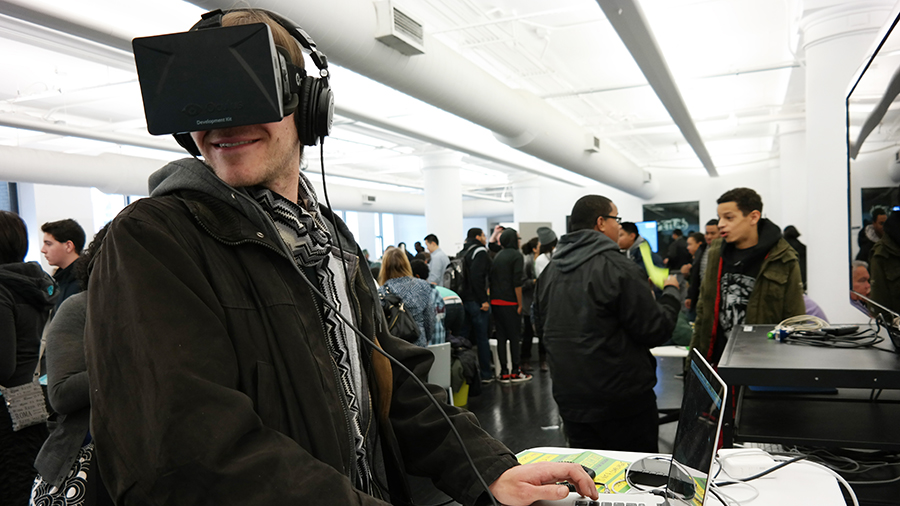 Another issue I found was the awkward and jolting walk of the human models. While the MakeHuman program allowed me to create a varied cast of characters quite quickly – I was no professional 3D modeller when designing and creating this project – it's humanoid character rigging is less than ideal. Some participants have noted a zombie-like shuffle, and others the way every character drags one leg slightly behind and to the side. Both are the unavoidable symptoms of my quickly created models. I myself cannot create more realistically-rigged models myself, nor afford to pay someone else for them at this time. Unfortunately the number and variation of Compliment's harasser and bystander characters make that option quite prohibitive.

Compliment is a work-in-progress, and I continue to make improvements. Based on the issues and feedback, revisions of the lighting, audio quality, and an increase in the number of people total, both harassers and passers by, will be implemented. Since enlarging the space, a more eerie sensation has been created and the cumulative effect of piling on harassment after harassment has lessened. In the next iteration I will be reworking that balance.